Patient and mild-mannered, the bloodhound can also exhibit deep determination and independence. This breed can be a great companion but also a challenge.

Bloodhound At a glance 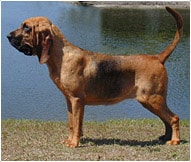 The bloodhound can display full canine expressiveness with baying, howling and whining.

The bloodhound is a large dog with long droopy ears and wrinkled skin, especially on the face.

The jowls and sunken eyes give this dog a dignified, mournful expression.

The coat is short, rather hard to the touch, and carries one of three possible color combinations: black and tan, liver and tan, or red. Some black and tan bloodhounds are predominantly black except for some tan spots on the legs and face.

The bloodhound is a gentle, patient, noble and mild-mannered animal. He's especially good with children and is known to be exceptionally tolerant of tots who clamber over him. He also generally gets along well with other animals.

Beneath this mild-mannered demeanor, however, run deep streaks of determination and independence. A bloodhound has a mind of his own, and tends to make his own decisions rather than obey his owner's commands. This tendency is especially true if the dog has detected an interesting scent; if that happens, he'll be single-minded in his determination to follow the trail as far as he possibly can.

The bloodhound is one of the most melodious members of dogdom. He can perform full canine arias that feature expressive baying, howling and whining.

Bloodhounds can be wonderful canine companions, but they also can be a tremendous challenge. They are relatively slow to mature, hitting adolescence at about one year and not reaching full maturity until at least age two. During that adolescent period, the bloodhound is likely to be boisterous, clumsy, curious about any interesting scent and fearless about eating anything that smells interesting. This tendency to eat includes such inappropriate objects as TV remote controls, towels, batteries and car seats, which results in expensive post-tasting surgery to remove those objects.

This dog's long jowls make him a prodigious drooler, and with a quick turn of his head, he can hurl that drool as far as 20 feet. The bloodhound's tenacity and independence can make training a challenge. Patience and consistency is needed to teach him basic good manners. Do not let your Bloodhound off leash, except in a securely enclosed area. An interesting scent will spark a single-minded pursuit that will make the bloodhound impervious to his guardian's commands. Nevertheless, the bloodhound is an energetic breed that needs lots of exercise, especially as a puppy hood. Like other large dogs, the bloodhound's life span is relatively short, about 10 years.

The bloodhound has a long and noble history. The breed was perfected in the 7th century by St. Hubert of Belgium and his monks. Since then, these dogs have frequently been associated with royalty. William the Conqueror brought several bloodhounds with him when he arrived in England in 1066, and modern bloodhounds are descended from those dogs. Meanwhile, back in Belgium, St. Hubert's monastery continued to present the king of France with a pair of black and tan bloodhounds every year. Even today, in French-speaking parts of Europe, these dogs are known as St. Hubert hounds.