A loyal, passionate breed, the black and tan coonhound is generally outgoing and friendly, although some may be reserved with strangers.

Black and Tan Coonhound At a glance 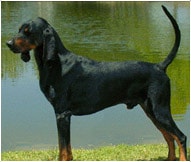 The black and tan coonhound requires daily exercise. This dog is active and was bred to cover lots of ground with ease.

This large, powerful working dog has long ears that droop downward and a strong, tapered tail.

The eyes are hazel or dark brown. The coat is short but designed to withstand both the rigors of winter and the heat of summer. As the breed name indicates, the coat is black with tan markings. The markings are located above the eyes, on the sides of the muzzle, and on the chest and legs.

The black and tan coonhound is responsive, intelligent, loyal and passionate about his work. He's also generally outgoing and friendly, although some may be reserved with strangers.

Because he's bred to work somewhat independently, the black and tan may seem a bit headstrong. Training may be more challenging with this breed than with others. He also is likely to be a howler. This noisiness reflects the black and tan's breeding and instinctive working methods.

The black and tan coonhound’s instinctive independence makes patient, consistent training a must. That same independence makes the dog prone to take off after an interesting scent. For that reason, it's imperative to keep the dog on a leash outside unless he's in a hunting situation. Vigorous daily exercise is a must. This dog is active and was bred to cover lots of ground with ease.

The black and tan's grooming needs are relatively minimal. Occasional brushing is all that's needed to keep the dog's coat in condition. However, as is the case with all dogs that have large floppy ears, regular ear cleaning is essential to prevent infection. Owners of black and tan coonhounds should consider adding a few bibs to their new-dog shopping lists. These dogs drool and slobber.

True to its name, the American black and tan coonhound has decidedly American roots. Developed in the southern United States, the dog's immediate ancestry can be traced to the American foxhound and the colonial-era Virginia foxhound, with some bloodhound stock probably thrown in. The bloodhound's influence can be seen in the black and tan's size, coloring, ample skin, long ears and trailing ability.

The black and tan is known best for its prowess as a raccoon hunter, but the dog is also adept at hunting bear, deer, opossum and mountain lion. The dog performs his work by running after his quarry and howling when the quarry scampers up a tree.