Cat Aggression: How to Calm Them Down

Sharing your home with spirited cats makes life interesting. But if your kitty has a tendency to become aggressive, especially unprovoked aggression, you may not know what to do. Aggressive cats are not uncommon, but they can sometimes be hard to read. Learning how to calm an aggressive cat will help you build a strong and loving bond with your feline friend.

Understanding a cat's body language during "normal" circumstances can help you identify when they're acting out of character. "It enables [pet parents] to more accurately 'read' their cats and understand their feelings and motivations for doing what they do. It also helps them respond more effectively to behavior issues like aggression," explains the ASPCA (American Society for the Prevention of Cruelty to Animals). Cats use their eyes, ears, tail and voice to communicate with their people, and as you get to know your cat, you'll recognize their behavior patterns for wanting food, playtime and affection. 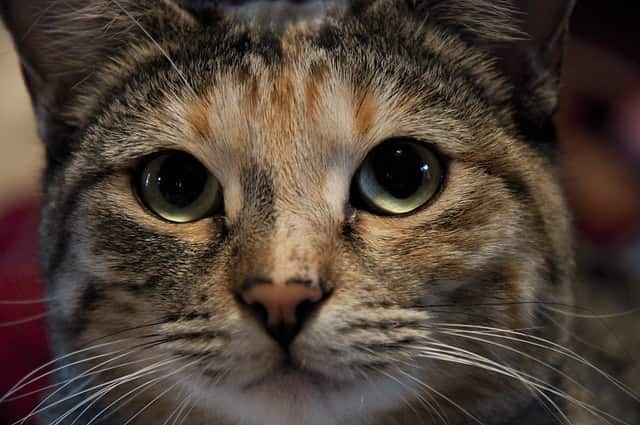 Some cats are naturally rowdy, doing crazy things such as running up and down the hallway (always in the middle of the night), throwing their toy mouse in the air and playfully yowling. This is not aggressive behavior, though; it's quite clear when a cat is being more than just rambunctious and instead is being downright aggressive.

There's no mistaking these signs of aggression:

If your cat suddenly exhibits these or other signs of aggressive behavior that is out of character, and for which there is no obvious cause, first take them to a veterinarian's office to rule out an underlying medical cause. Once they have a clean bill of health, you can then identify and manage other possible causes of your cat's mischief.

Keep in mind that it's not unusual for cats to be feisty; as the Cornell Feline Health Center points out, "Aggression, defined as hostile or violent behavior intended to dominate or intimidate another individual, is a fairly common behavioral problem in cats." A few causes of aggression include age (kittens and young cats up to age 2 are the very definition of "rowdy"), lack of socialization (this is especially true for cats that are isolated in their early life stages), and maternal instincts (mama cats are very protective of their babies).

The most common culprits behind the behavior of aggressive cats are three forms of redirected aggression: play, inter-cat and territorial.

Cats love to play, but play can sometimes turn into aggression. This commonly occurs in kittens, who are just figuring out their boundaries. If they bite or swat their littermates too roughly, their siblings will straighten them out quickly. Cats that are about to take playtime to the next level shake their rears and flatten their ears, and their pupils may dilate.

Inter-cat aggression is the second most common type of aggression (the first being play aggression), according to Tufts's Cummings Veterinary Medical Center: "Cats may not cohabitate well for a variety of reasons, including incompatible temperaments, territorial competitions or as a consequence of overcrowding." For example, when cats that once got along suddenly have conflict, it could be because one of them smells differently after visiting the vet.

Many cats enter attack mode when they are intimidated or provoked by people or other pets, which is why your cat may be perfectly lovely with you but then suddenly growl and swat at a visitor, or whack the family dog if they try to snuggle on the couch with them. If a cat thinks someone or something is going to invade their turf, they'll lash out.

But thankfully, there are ways to curb your cat's aggressive behavior.

How to Calm an Aggressive Cat

After identifying the reason for your cat's aggression, you can better manage their behavior. Some reasons are temporary and somewhat easier to manage, like maternal aggression, because you know exactly what to do: Stay away from mama cat and let her do her thing. For other instigators, you may have to be a bit more creative.

As noted above, play aggression is a very common form of feline aggressive behavior. One way to de-escalate this — and even prevent it in the first place — is not to roughhouse with your cat. This form of play, in which your cat attacks your body with their jaw and/or claws, promotes combative behavior.

If they gravitate toward rough activities, redirect their attention to a replacement toy such as a stuffed animal. Stuffed animals made for dogs are great for aggressive cats because they consist of sturdier material than most cat toys and won't disintegrate after the first attack.

Once a cat establishes their domain, they'll make sure other animals (and people) know they are the boss. If you are introducing new cats to each other, or if one cat begins to aggressively dominate another after they've been cohabiting for a long time, you may have to separate their eating, living and litter box areas and reintroduce them slowly. 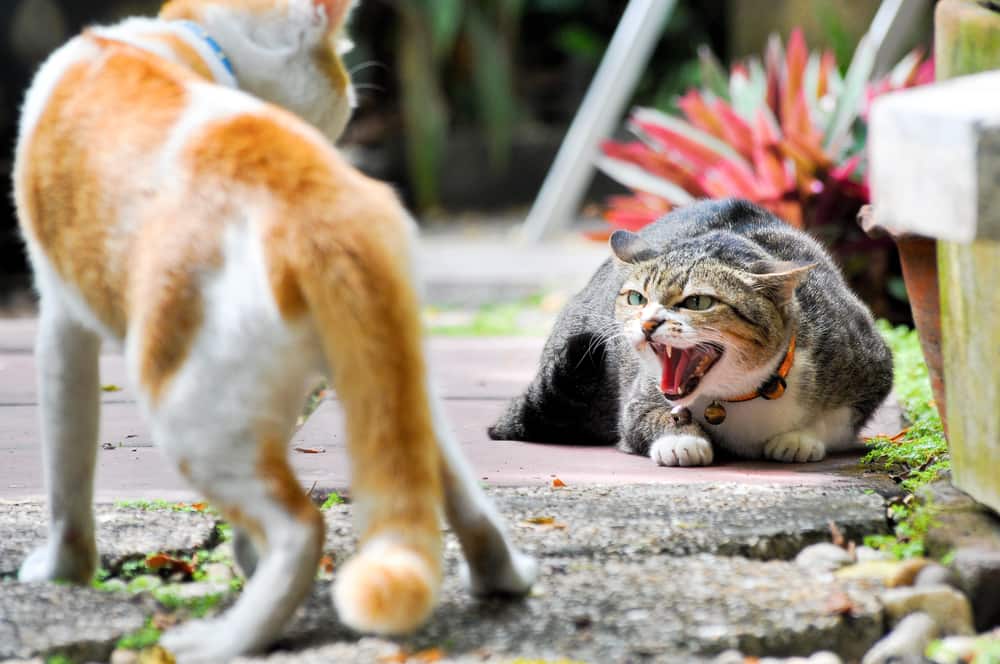 Very aggressive cats can be a danger to others, so you never want to intervene while your cat is on the defense, or you'll end up creating more chaos. If two or more cats are tussling, make a brief loud noise or create another distraction that will separate them. If your cat is fearful and alone, you'll be tempted to pet or console them, but they may perceive this gesture as a threat. Therefore, don't attempt to approach or touch them until they're ready. Don't worry — they'll let you know when.

As the joke goes, cats train their pet parents and not the other way around. As you navigate your cat's aggressive behavior, don't try to punish them, "as this may cause a cat to become fearful of people or may be interpreted as play, which may inadvertently reward the aggressive behavior," explains Cornell. "Walking away and ignoring a cat engaged in play aggression may teach him that inappropriately aggressive play results in no play at all." Bottom line: Reward the good behavior and not the bad.

When to Seek Veterinary Care

Unusual aggression in cats that cannot be attributed to a specific cause requires a trip to the vet to diagnose a possible larger problem, including an underlying medical condition. Neutering and spaying your cat will reduce feline aggression, as will treating them for a health issue. Illnesses that can cause cat aggression include epilepsy, trauma, dental disease, diabetes, hyperthyroidism (accelerates metabolism), hypertension (high blood pressure), primary brain disorder, FeLV (feline leukemia), FIV (feline immunodeficiency) and FIP (feline infectious peritonitis, a viral disease). Treatment for these conditions can decrease or eliminate your kitty's aggression. Early intervention is the best thing you can do to keep your furry friend in top health.

With these tips, advice from your vet and a lot of patience, you may be able to calm your fur babies and enjoy a long, happy life together.

Christine O'Brien is a writer, mom, and long-time cat parent whose two Russian Blues rule the house. Her work also appears in Care.com, What to Expect, and Fit Pregnancy, where she writes about pets, pregnancy, and family life. Find and follow her on Instagram and Twitter @brovelliobrien.